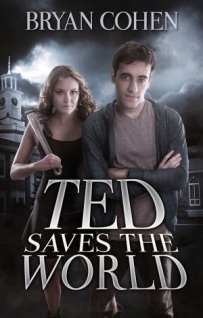 Summary:
Ted, a shy teenager, sits at a diner where his girlfriend Natalie has just dumped him. Enter dark souls, in the guise of goons, bent on killing people. Ted stops them using the superpowers he suddenly discovers that he has.
Erica, who was Ted’s neighbour and crush, has been dead for about a month. A light soul, who is meant to protect Ted, enters her. She is back from the dead, with the powers and traits of a light soul and memories of the real Erica.  Along with Erica, Natalie, Dhiraj (his best friend and finance and computer whiz), and a few others, Ted goes about saving the world.
My thoughts:
The book has an interesting storyline and characters. It is enjoyable and also apt for the target audience (young adults). Bryan Cohen has successfully integrated fantasy elements into our world.
There is a lack of continuity in some places, especially where there are sudden scene changes and flashbacks. I found the reason for Erica not telling Ted what he obviously needs to know rather unconvincing.
Although the ending leaves scope for a sequel, all loose ends are tied up.
If I had a teenage son/daughter, I would buy it for him/her.

Note: This book was given freely to me by Bryan Cohen in exchange for an honest review. I thank him for that.